Even the most rational and calmest of investors and market watchers cannot resist getting caught up in the mild sense of panic that develops when markets behave the way it did around the globe yesterday. Market movements in China caused a sell-off and wild fluctuations not seen in recent times.

According to a report on Bloomberg.com the chaos reached fever pitch yesterday when US share markets saw one of the most volatile days in history. “This included the Dow Jones Industrial Average making multiple 500 points swings in a single session,” Bloomberg reported.

Local news service Moneyweb referred to the events of yesterday as ‘brutal. Simply brutal’. It all started in China when the stock market there closed 8.5% lower, one of the worst days in percentage terms since 2007. Other markets followed this trend with the Nikkei in Japan closing 4.61% down, Hong Kong’s Hang Seng 5.17% down from previous close and Australia’s ASC 4.09% down. In Europe the UK’s FTSE 100 closed 4.5% lower, the German DAX 3.7% lower and the French CAC40 4.5% lower.

The local market did not escape the trend and the JSE traded at 5% lower than previous close for parts of the day but ended the day at ‘only’ 2.85% lower.

Paul Hansen, Stanlib Director of Retail Investing, reported in a note today that this is not a crash, more a correction or ‘rout’ in market speak.

Key question, of course, is how long will this continue? When and by how much will markets recover as significant value was wiped from share values in recent weeks? In the case of South Africa many variables are weighing down any possible upturn. These include slow to almost non-existent economic growth, a dramatic decline in the value of the local currency, a degree of policy and strategy paralysis from the state, the downturn of the commodity cycle threatening the future of the mining industry and an uncertain political future.

The many factors that have an impact on investor sentiment makes it difficult to speculate on what lies ahead for markets, locally and globally. History is never a firm indicator of what to expect but there is some comfort to be gained from a review of market movements of the past 20 years and how markets bounced back after crashes and corrections. 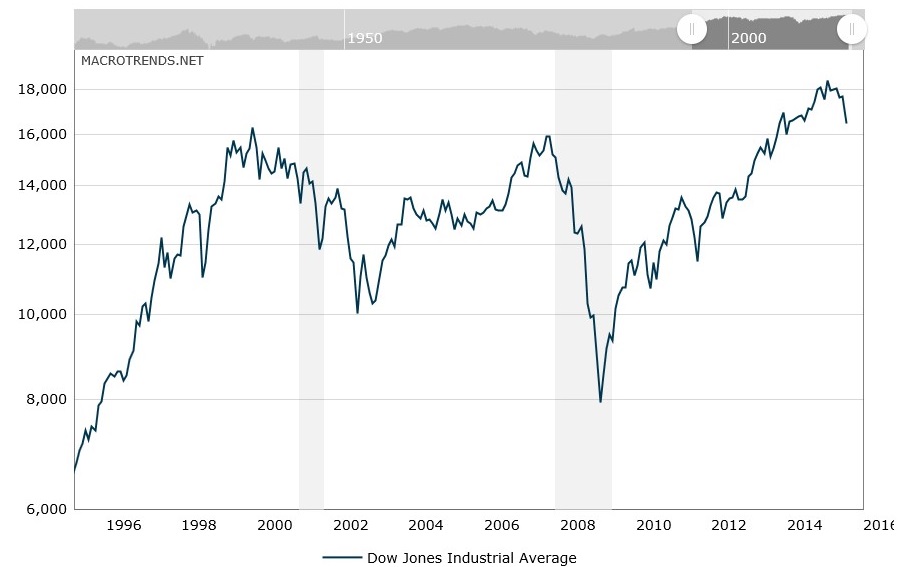 The sharp downturn at the end of 1999 early 2000 was caused by the so-called ‘dot.com’ crash when a historic speculative bubble developed on markets. After that it took a good eight years for markets to return to earlier levels before the spectacular crash of 2008. On September 16 2008, failures of massive financial institutions in the United States, due primarily to exposure of securities of packaged subprime loans and credit default swaps issued to insure these loans and their issuers, rapidly devolved into a global crisis resulting in a number of bank failures in Europe and sharp reductions in the value of stocks and commodities worldwide.

Since the drama of that period markets have risen consistently and indices like the S&P500 reached new record highs earlier this year. The local market also did well and the JSE All Share was at a new record high late April this year.

The message is, remain calm. No reason to make dramatic changes to portfolios at this time – other than increasing exposure to offshore investment opportunities for the immediate medium term as the local market faces a myriad of external factors pushing share prices down.

Stay focused on the long term view. Buy quality shares (in the current situation the share prices of successful companies offer a good opportunity) and hold. The market drama will die down and sanity will return. It may take a number of years as the graph of the Dow Jones Industrial Average the past 20 years shows.

Brenthurst will follow the market movements closely and will continue to advise clients on how to structure portfolios for long term performance.