From the first trading day of 2016 volatility and a fresh set of challenges complicated the decision making process for investors already in shock after a tumultuous 2015.

Volatile Asian markets, lower commodity prices and a cycle of rising interest rates, locally and in the USA, are some of the factors fuelling an uncertain environment.

However, rising interest rates can be good for some. Retired investors are especially hard hit when values on stock markets decline affecting investment capital and many find it difficult to cope with the market ups and downs. For a long period interest rates have been very low, which resulted in below inflation beating returns from interest bearing investments while far superior returns were achieved through investment in shares and funds like unit trusts or ETFs.

This has now started to change as interest rates are raised in an attempt, in the case of South Africa for instance to curb inflation, attract investment and although denied by SARB, to stabilize the currency. Investing in money market or similar interest bearing investment options may deliver comfort to investors who have become very risk averse as markets become increasingly unpredictable. A guaranteed return for at least a portion of total funds invested could be a good diversification tactic going forward, which was not attractive for quite some time.

It is, however, important to point out that we are only at the beginning of an increasing interest cycle and therefore any exposure to interest bearing instruments should only form part of a 2016 strategy. In view of the rand’s sudden and dramatic decline, seeking opportunities beyond the borders of South Africa has and still remains for the foreseeable future the most attractive solution for longer term returns.

Although global markets are not immune to market forces such as a slowdown in the Chinese economy, rising USA interest rates, falling commodity prices and political upheaval, few countries have as many challenges affecting share prices compared to what South Africa is currently facing. The fall-out on markets in the wake of President Zuma’s irrational firing of former Finance Minister Nhlanhla Nene replacing him with an unknown backbencher is certainly priced in to local markets. In two trading days post the removal of Nene the rand lost 10% of its value while the losses on the JSE was an estimated R180 billion as foreign investors fled. Even after he went back on his decision and brought trusted Minister Pravin Gordhan back for that position the currency has not recovered to the levels it traded at pre-Nenegate.

In addition to that blunder, the local market has been hit by crashing commodity prices, credit rating downgrades, the lowest business and consumer confidence in more than 15 years, rising unemployment, a severe drought, water and electricity shortages, higher number of protests regarding a range of issues such as student fees and lack of service delivery, and a lack of policy direction.

A widely expected further downgrade of the country to junk status will push the market further down and returns even from respected blue chip companies are likely to be muted. As a result we are tempering expectations from the local market and lower, single digit returns are expected from the local bourse.

In fact for some time now, most wealth managers like Brenthurst, have been warning of these lower returns, especially when looking at the strong historic returns. Considering the commodity bear market, political and other internal issues, the South African economy is not in good shape. From 2001 to 2014 the JSE ALSI, with the exception of three years, delivered strong double digit returns while in 2015, we saw a definitive change in this trend with the JSE producing a dismal 5.1% return for the year.

The graphs show the JSE ALSI vs some of the major international indices in rand and US Dollar. 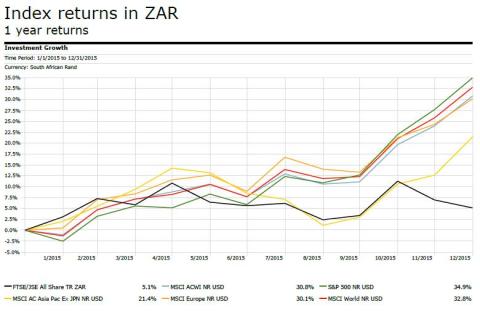 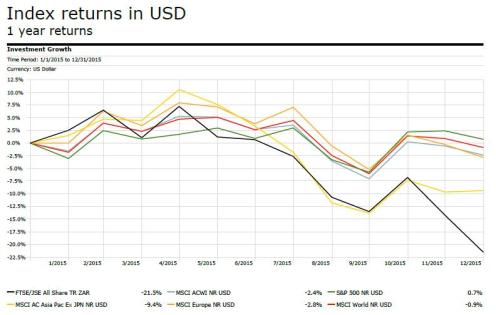 A similar trend emerges over three and five years where international markets have substantially outperformed the JSE ALSI in rand and US Dollars.

So how should investors position portfolios for the year ahead?

Building some protection in a volatile and rising interest rates environment, gaining accessibility to international markets and opportunities not available in South Africa and protecting wealth from any further declines in the currency, continues to be a strategic theme for Brenthurst Wealth.

Having a clearly defined strategy which includes diversification, offshore allocation, appropriate asset allocation for an investor’s particular objectives and regularly reviewing portfolios can still yield acceptable returns for 2016, albeit in a tougher environment.

With all of this in mind, navigating this landscape requires a careful approach, best attempted with the assistance of a qualified financial advisor.